If the private sector fully embraces renewables, RE100 suggests that 15% of global carbon dioxide emissions could be saved.

Imagine a world in which all private companies are fully committed to reducing greenhouse gas emissions by operating solely on renewable electricity. This world, according to internationally collaborative enterprise RE100, could potentially reduce worldwide carbon dioxide emissions by 10 to 15%. That is, if the RE100 initiative can ignite a movement that results in 100% of all private companies across the globe transitioning to renewable energy sources, up to 15% of global emissions could be reduced.

As seen in the below infographic from RE100, How Businesses Are Powering a Low Carbon Economy, with the confirmation that 53 companies have now joined RE100, it is estimated that 0.4% of the world’s electricity demand will now come from renewables. For perspective, according to The Climate Group, 0.4% of renewable electricity would be enough to power Hong Kong and Singapore, and would save around the same amount of carbon dioxide per year that is equivalent to Morocco’s yearly emissions. For more information, read The Climate Group’s Private Sector Switch To Renewables Could Cut CO2 By Nearly 15%.

To celebrate the ever growing number of private companies that have joined the RE100 movement, The Climate Group and the CDP have released several informational images, including the one below, in order to highlight the potential positive effects that could be achieved if more companies were to follow suite. This includes the estimation that renewables would make up 40 to 50% of global electricity demand if all companies were powered by renewable electricity, resulting in up to 15% of CO2 emissions being saved. Check out the infographic below for more information.

RE100 Infographic: How Businesses Are Powering a Low Carbon Economy 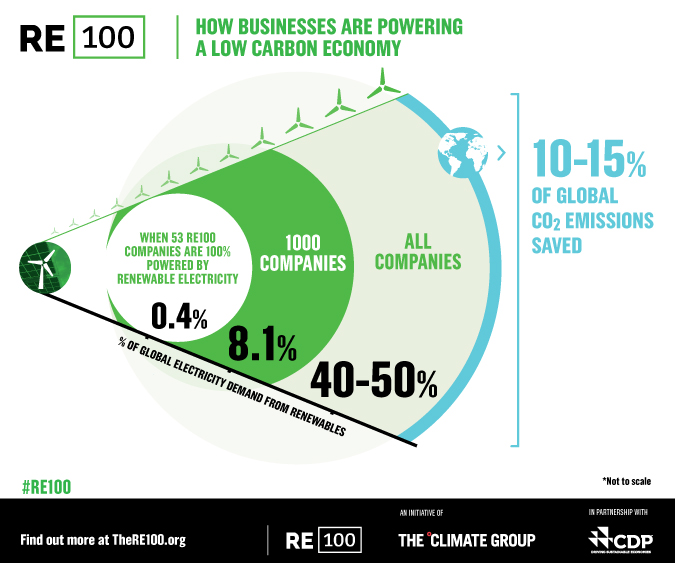 (Infographic via The Climate Group)